If you need full access to the book, please write an email to the Publisher. Your request will be redirected to the author. If s/he is interested, s/he will directly contact you using the email address you have specified to discuss the conditions for obtaining access without the intermediary of the Publisher.

Throughout history, around the world, civilian self-defence systems, combat sports and military combatives have been devised. Almost all of these are of an eclectic nature. For instance, Greek Pankration is a combination of traditional Greek boxing and wrestling; modern Karate was derived from older Okinawan and Chinese fighting methods; and Korean Taekwondo is based on Karate and the ancient Korean art of Taekkyeon. Both William E. Fairbairn’s Defendu (derived from Japanese Ju-jitsu, etc.) and Bruce Lee’s Jeet Kune Do (derived from Chinese Wing Chun, Western boxing, Western fencing, etc.) are perhaps the most revolutionary and influential eclectic fighting systems of all time. The founders of these arts felt that the older methods could be improved. I too had the same feeling. Therefore, I developed a reality-based eclectic system of self-defence/combat. Being of Indian descent, I gave it an Indian name: Harjit Singh Yuddh Kalaah (Sanskrit: Harjit Singh Fighting Art). I also call it Mishra Yuddh Kalaah (Sanskrit: Mixed Martial Arts). I now share it with you in this book. 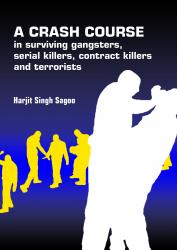 This work is licensed under a Creative Commons Attribution 4.0 International License.

Details about this monograph